Spring 2011 saw some of our more senior members wanting to challenge their ability as pan players that little bit further by beginning to learn a new piece of music for Notting Hill Carnival.

During the Easter holidays Claire, Clare, Tom, Abi and Jess began to learn Brent Holder's 'Pan in de Panyard' in preparation for joining CSI (Caribbean Steel International) for the Carnival's National Steel Band Panorama competition. Having all played in panorama at least once before, we knew that once rehearsals began, we would be spending most of our free time learning the music and practising until it was note perfect! Joining forces with pan players from in and around Northumberland and Newcastle, we learned as much of the tune as possible before CSI players travelled up to the cold and rainy North to check that what we had was right (panorama pieces are prone to changing as the arranger tweaks his tune until it is just right) and teach us another section, so that by the time we headed to London we only had to learn the introduction and end. 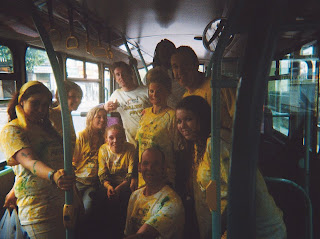 Abi, Claire, Tom and Jess (among others!) on the bus on the way back from J'ouvert.

'How many months does it take to learn one song?!' I hear you ask- well, given the complexity and length of piece (just shy of ten minutes!) I can safely say that every minute was needed to ensure that we were able to confidently play our part and slot seamlessly into Caribbean Steel International. Rehearsals took place in our Panyard in Haydon Bridge, Newcastle, Wooler, living rooms, bedrooms and anywhere else we could set up a pan and play from Easter until the middle of August when we booked our accommodation and train tickets. 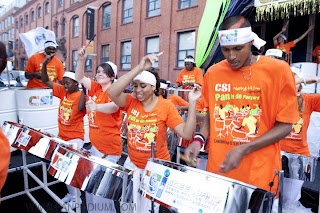 Clare playing during the performance

So August the 22nd saw us head off to the train station (with our instruments being driven down in a van) bound for London. One long journey later and we (Claire, Clare and Tom) found ourselves walking all the way around Queen's Park Rangers football ground in an attempt to find the pan yard! However, eventually making it, we were greeted by Brent who told us to head inside and find our pans- not an easy feat with a room of around 100 musicians and even more pans! We eventually found our pans and started learning the ending and intro straight away before coming together as a whole band and playing from start to finish; picking up dance moves and changes to notes along the way. By the end of the night we were so pleased to have all the notes so that we could use the rest of the week to rehearse.

Rehearsals were long, sweaty (!) and deafening but we wouldn't have changed it at all! I can definitely say that I went to sleep every night singing the tune and running through which bit came first/ next/ after the chromatic/ before the 'new' bit etc etc before waking up and walking to White City to actually play the tune- whether it was section practise in the park or whole band practise until the early hours of the morning. Or as we soon discovered, in Sainsburys car park... 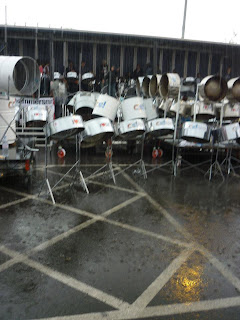 Rehearsing in the rain!

So, rehearsals moved to a corner of Sainsburys car park which meant that come Saturday the 27th (Panorama day, and Claire's birthday) we could wheel the instruments to the performance venue on Kensal Road. Rehearsals were very rainy and we had to stop playing mid-tune to empty our pans as they had filled with water on numerous occasions. The spirit and vibes in the band hadn't been dampened at all by the weather and everyone played their hearts out on every run through. 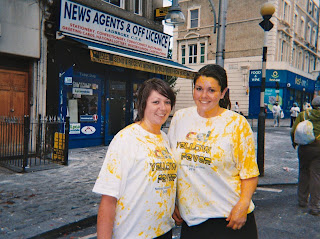 Claire and Clare at J'ouvert!

Panorama day was sunny/ rainy/ sunny/ rainy etc ALL day! We got to Sainsburys and started moving all the instruments down to Kensal Road and set up ready to spend the rest of the afternoon practising our tune. As the clock ticked on we grabbed our panorama t-shirts and white trousers (this was a concern due to all the rain!) but we got changed and moved the pans ever-closer to the judges. 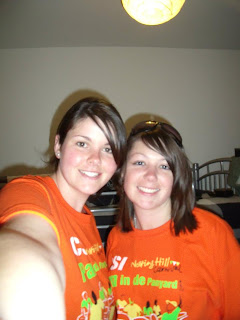 Clare and Claire (opposite way around this time!) after panorama.

We wheeled the pans in front of the judges; binning our disposable ponchos on the way (these had kept us reasonably dry all day and we didn't want to take them off!). Before we knew it Brent was counting us in and we were performing! It seemed to be over so fast and we danced and jumped so much I thought I actually wouldn't make it to the end! No sooner had we started, we were at the end of the tune with all of CSI's fans cheering us on! We finished the tune and moved along the road absolutely shattered but thrilled with how the tune had gone and the vibes within the band. We packed up our pans and headed to wait for the results. 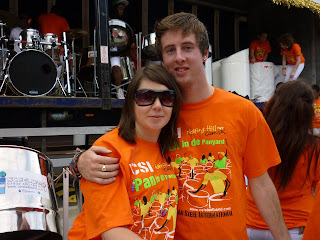 Waiting to perform- Claire and Tom.


The judges began with 6th position and we waited eagerly to hear where we had placed.... it was announced that we had been placed third (267 points) with Ebony 2nd (274 points) and Mangrove 1st (275 points)! Once the celebrations had calmed down, we began to walk back to the panyard but leaving Kensal Road took longer than we had thought! The further we walked the more people that stopped Brent to congratulate him on his tune and the band's performance- everyone was still buzzing from playing and to hear these comments was even better!

We headed back to the panyard to chill out for a bit and make arrangements for J'ouvert the following morning which included a 4am meet back at Sainsburys! We headed to the accommodation and tried to get in some sleep before our carnival celebrations. But, before we knew it, it was time to be up and about and I can tell you that, despite it being late August, London is cold at 4am! We waited at Sainsburys for the wagon driver to turn up so we could get on the road, play some tunes and get absolutely covered in paint (this year CSI chose yellow), talc, tomato sauce and whatever else people were throwing/ squirting/ splashing! It was BRILLIANT! As the sun rose and the paint began to dry on our faces we began to walk back in the direction of where we were staying- luckily, a nice bus driver let us on his bus so we didn't have to walk too far but we did get some funny looks! Lots of extra long showers later and it was time for Carnival...

It was definitely a fantastic experience and something that we are keen to repeat again this year with some more of the panners (hopefully). We would like to say a HUGE thank you to Mr Brent Holder and all our new friends in CSI steel band.

We are counting down the days....

Posted by Sunshine Panners at 11:55