Sunshine Panners play for the Queen! 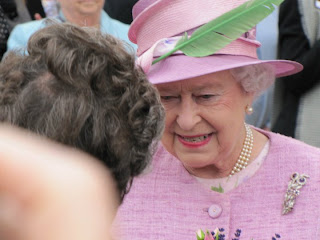 On Wednesday 22nd June, the Sunshine Panners Steel Band went to Alnwick Castle to play at a garden party for carers and volunteers which was attended by the Queen and Prince Philip. 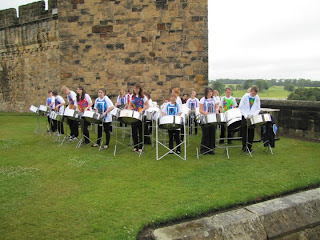 The day before we went, seven volunteers (a mixture of adult helpers and panners) took all of the pans to the castle as we had two trailer loads! The next morning, all 24 band members – along with nine adult helpers - met at half past six and by seven o’clock we were on the road to Alnwick.

Once we got to Alnwick, we took all of the pans from where they had been stored the night before to where we were playing. With 33 people helping, it didn’t take us that long. We were in a fantastic position in a courtyard in the castle grounds. I think it was where they filmed the flying lesson in the first Harry Potter film. We weren’t the only band playing in the courtyard. There was a bagpipe marching band, a brass quintet and a big band that did a variety of music from the Blaydon Races to an Oliver medley. 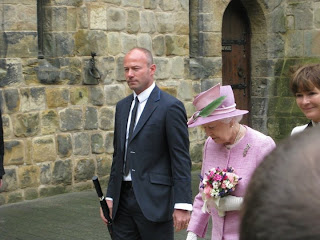 About half way through our first set, it started to rain. There was a mad rush to cover up all of the pans with bubble wrap and plastic sheeting. Some of us got soaked! Once the rain had eventually died down, we took off the plastic sheeting, dried off the pans and started to play again. After that, the sun stayed out for the rest of the day and it stayed dry. 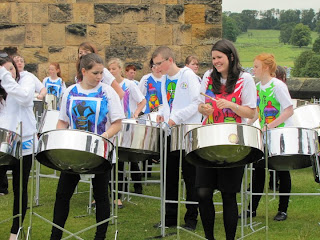 At eleven o’clock, the Queen and Prince Philip arrived. We didn’t get a brilliant view of them because they were walking along a path which was surrounded by people – five deep on each side and we were at the back. Some of us managed to get some good photos though. When they came back from lunch, the Queen and Prince Philip drove past us slowly while we were playing and apparently they were watching us and enjoying the music.

By three o’clock, the Queen and Prince Philip had gone (and so had the guests) so we packed up the pans into the trailer and headed home. It was a long day, but one of the best performances we have ever done. 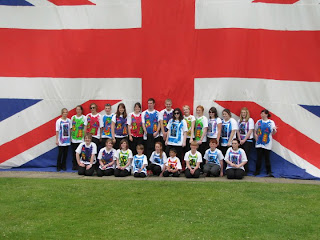 Posted by Sunshine Panners at 12:29